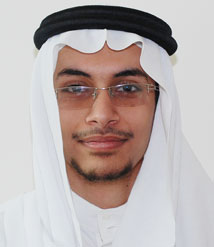 Guyton and Hall’s textbook of Medical Physiology has been a favorite scientific book for both students and teachers for many years. This famous book is now in its 11th printing. Students in particular enjoy reading it since the figures, diagrams and charts in the text explain and simplify a lot of the main concepts.

While studying the circulation unit in the book, Mr. Abdulhadi Alamoudi, a medical student at Alfaisal University, noticed that a figure was presented incorrectly. The “oxygenated” blood leaving the left ventricle was represented in the figure in question as “deoxygenated” blood. Mr. Abdulhadi, when asked what he did next, said “I discussed the error in the book with our Physiology Professor, Dr. Ali A. Khraibi, who is also a friend of the authors. Dr. Khraibi gave me Dr. Hall’s e-mail and I wrote the author a note about my finding. A couple of days later, Dr. Hall, who is a Professor in the Department of Physiology & Biophysics at the University of Mississippi Medical Center in the USA, sent me an appreciative e-mail for my feedback on improving the textbook and noted that the correction to the figure would be made in the next edition. To receive a message of appreciation from such a well known physiologist is a great honor for me.” Well done Mr. Abdulhadi!