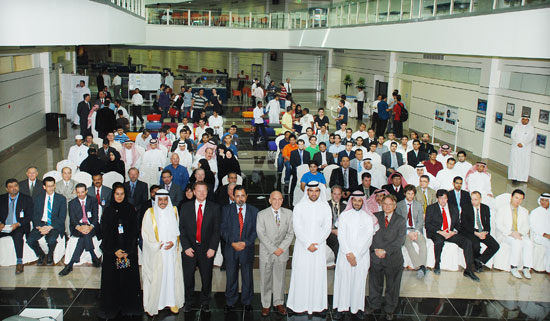 The Alfaisal community of Scholars, Learners and Professionals all came together in yet another historic event to celebrate the Second Annual Fall Convocation Ceremony on Wednesday 14 October 2009, in the Alfaisal university campus.

With over 200 attending the event, Alfaisal leadership, faculty, students and their families were invited to join Acting Provost and Vice Provost for Academic Affairs, Dr. Ronald Bulbulian and distinguished keynote speaker Mr. Rami Alturki, President, Alturki Group and established entrepreneur, to mark the beginning of the academic year.

Fall Convocations are traditional at universities around the world. They traditionally mark the opening of each new academic year at most western and international universities. Alfaisal University initiated the beginnings of such a tradition last year with its inaugural Fall Convocation 2008/2009, and this year’s ceremony was yet another example of the continuous efforts to expand on this custom in culturally appropriate ways.

In his Provost speech, Dr. Ronald Bulbulian welcomed all faculty, students and their families to the ceremony stating,

“You are the reason we are here today. We are very happy to have you join our community and become a part of the great University we are striving to become. Together with those who helped launch Alfaisal University last year, we hope to continue building on the vision of our founders as a first class private research University”.

In his key note address, invited Guest Speaker Mr.Rami Alturki overwhelmed the audience at the ceremony with his inspirational words and a motivational recollection of personal experiences captivating and enthralling students and their families. He encapsulated the essence of his speech by giving students five main points to take with them: “Find your passion and follow it, Learn how to adapt to constant changes accruing around you, Surround yourself with people who are smarter than you, Don’t over extend yourself; you cannot go from zero to 100 over night, and finally Never ever, ever give up!!”.

Mr. Alturki, is the President of Khalid Ali Alturki & Sons (Alturki Group), a leading family investment company which has been operating in Saudi Arabia for over 35 years. Mr. Alturki holds an operational role as President of Saudi Readymix, which is a wholly owned subsidiary of Alturki Group and is the largest supplier of concrete products in the Middle East ranking # 80 in the 2009 top 100 Saudi Companies listing, and chosen as one of the Saudi Fast Growth 100 Companies. He has also held several senior positions with a variety of companies throughout the region as well as internationally, including ORBCOMM Middle East & Central Asia, Bahrain and Arthur Andersen, New York. He has over 13 years of experience in the business world and completed his BA degree in Economics from Williams College, Williamstown, MA in the United States.

Spokesperson for Alfaisal University and Master of Ceremony at the event, Saphia Ikram stated, “Every year a successful entrepreneur from our community is selected by the University Leadership to be the Guest Speaker at Convocation, a role model and to inspire our next generation. We took the opportunity to showcase outstanding role models like Mr. Rami Alturki, to influence our students to pattern their lives. He truly inspired our youth to think about what they want to be, what they want to do and how they will contribute back to the community. Mr. Rami Alturki is a role model for our students, an example of hard work, and success from all walks of life, , and who has, today helped our students to realize their possibilities.”
Held at University Campus, the Convocation ceremony also provided students with an opportunity to gather with their classmates, recognize the size and strength of their class, and join the Alfaisal University academic community through a major campus event that parallels the joyous and meaningful commencement ceremony that will mark their graduation only a few years in the future.

In a special note, Bara AlMakadma, 2nd year student, College of Medicine gave encouraging and heartening advice which reached the freshman class of 2009/2010 stating, ‘Its important that you learn from us and the people that surround you …manage your time to achieve high results and take up the opportunities offered here at the university to be an active student of Alfaisal”.

Another highlight of the event was the ‘Honoring of the Honor List Students’. Students who achieved a Grade Point Average (GPA) of 3.75 or above out of 4.00 for academic year 2008/09 were congratulated and awarded at the ceremony by Acting Provost Dr. Ronald Bulbulian, and Vice President Student Affairs, Dr. Abdulhamid Al Abduljabbar for their academic performance. Recipients of the award included to two students from the College of Business, three from the College of Engineering and nine from the College of Medicine, all of whom will receive an additional scholarship of 20% of tuition fees, provided by the college.

Alfaisal University is committed in its mission of delivering world teaching, and contributing to the development and advancement of the kingdom. Dr. Ronald Bulbulian stated:
“I am confident in the enthusiastic support of our faculty, managers, directors and students in making this vision a reality,” he said.

Pathway for being a Green Building Professional