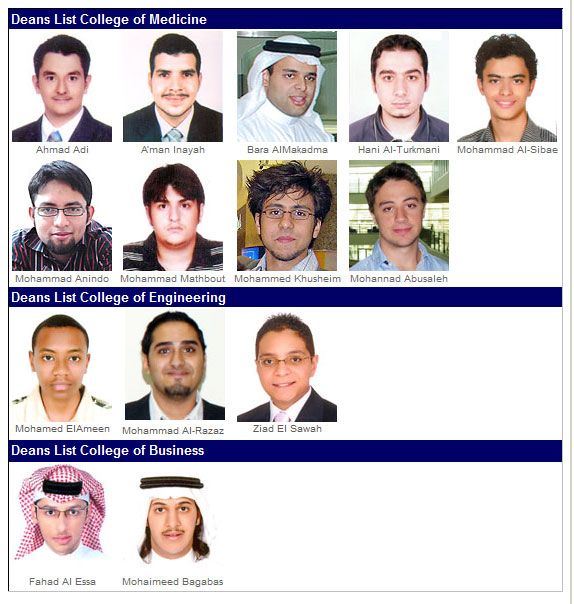 In a continued effort to promote and nurture the environment of academic excellence, Alfaisal University launched its ‘Deans List program’ in 2008 to recognize and acknowledge the outstanding academic achievements of its undergraduate students, at the end of every academic year.

he Dean’s List is a category of undergraduate students at Alfaisal University who achieve a Grade Point Average (GPA) of 3.75 or above out of 4.00. Students achieving a GPA of 3.75 are acknowledged by listing their names on the Deans List Wall of Honor, located at the main entrance of the Science Building, Alfaisal University Campus, awarded certificates of recognition, and granted an additional 20% of tuition fees, provided by their college. The deans list is also published in all local newspapers by the University.

At the Annual Fall Convocation Ceremony 2009/10 this year, Students from the College of Business, Engineering and Medicine, made history as they were congratulated and acknowledged, as the first cadre of Alfaisal students to be listed on the Wall of Honor, for academic year 2008/2009.

“The Deans List is a program that encourages Alfaisal students to continuously strive for greater results, this incentive will allow our students to excel academically with zeal throughout their years of study and we at Alfaisal are committed in recognizing their hard work and efforts” stated Dr. Abdulhamid Al Abduljabar, Vice President for Student Affairs. “We hope this has set an example for our freshman students’ and we look forward to honoring this years achievers”.