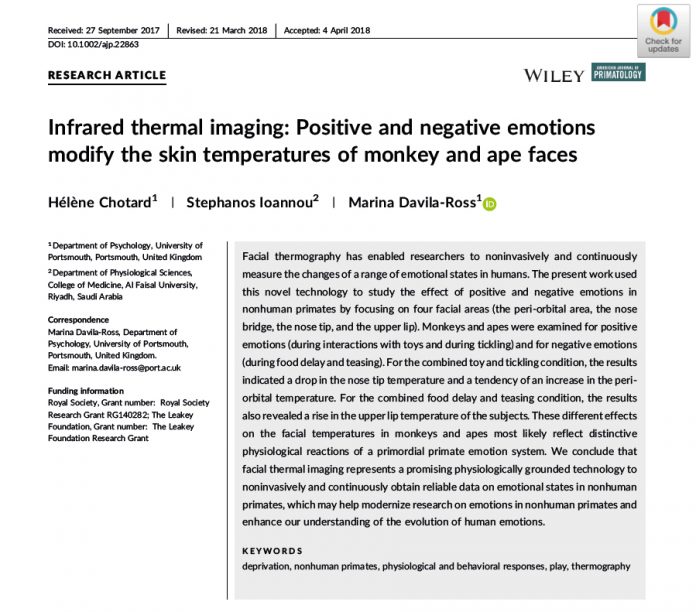 This is a new publication for a research work on thermal imaging accomplished by Dr. Stephanos Ioannou, from the department of Physiological Sciences at College of Medicine, published on April 4,2018, in American Journal of Primatology.
Abstract: Facial thermography has enabled researchers to noninvasively and continuously
Measure the changes of a range of emotional states in humans. The present work used
this novel technology to study the effect of positive and negative emotions in
non-human primates by focusing on four facial areas (the peri-orbital area, the nose
bridge, the nose tip, and the upper lip).Monkeys and apes were examined for positive
emotions (during interactions with toys and during tickling) and for negative emotions
(during food delay and teasing).For the combined toy and tickling condition, the results
Indicated a drop in the nose tip temperature and atendency of an increase in the periorbital
temperature. For the combined food delay and teasing condition, the results
also revealed a rise in the upper lip temperature of the subjects. These different effects
on the facial temperatures in monkeys and apes most likely reflect distinctive
physiological reactions of a primordial primate emotion system. We conclude that
facial thermal imaging represents a promising physiologically grounded technology to
non-invasively and continuously obtain reliable data on emotional states in nonhuman
primates, which may help modernize research on emotions in nonhuman primates and
enhance our understanding of the evolution of human emotions.

The Challenge of Translating NGS from Bench to Medical Genetic Service’’

A 39 Impact Factor Medical Journal The Lancet to Publish a...