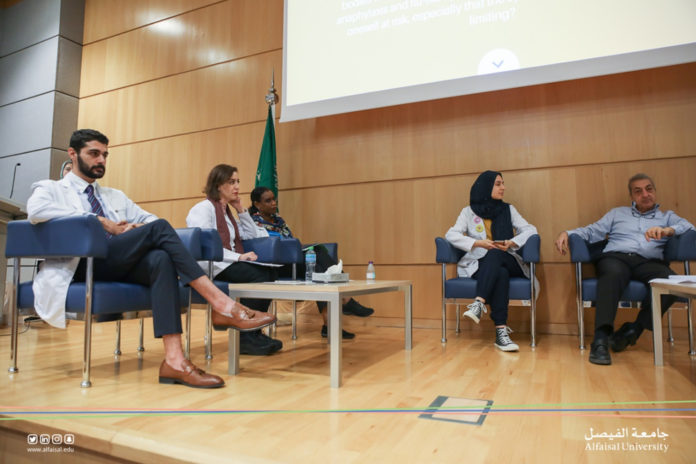 The Medical Students Association (MSA) organized a 3 day campaign (1st – 3rd December) at Alfaisal University, Riyadh. The campaign aligned with the ongoing Flu season due to change in weather.

Influenza or ‘Flu’ is a viral infection that attacks our respiratory system. For most people Flu resolves on its own, but sometimes if the symptoms worsen then a Flu Vaccine is needed. Often times people take it as a precautionary measure as well.

A booth was set up on the ground floor during the campaign to generate awareness about the Flu Vaccine. On the second day of the campaign a debate was held in the female theatre on the advantages and disadvantages of the Flu Vaccine. The two teams, yellow and blue, comprised of three doctors each including Dr. Guiseppe A Botta (Professor of Microbiology & Infectious Diseases) and Dr. Hatouf Husni Sukkarieh (Assistant Professor of Pharmacology).

The debate analysed the side effects, effectiveness and cost of the vaccine. It was followed by an audience voting session to determine the winning team and a prize raffle for the attending audience.