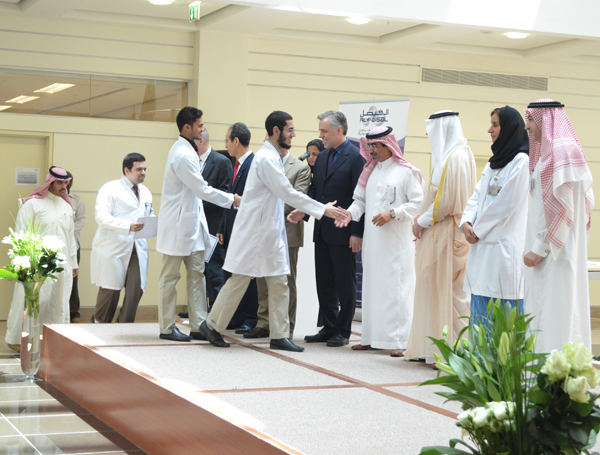 Almost 100 students were recently honoured for their achievements at an Annual Student Research Recognition Day. The event which was held on 1 May 2013 at Alfaisal University in Riyadh highlighted the importance of student involvement in research, the university’s commitment to its research mission and to recognize and award students achievements.  Accomplishments included being the winning posters in the Alfaisal University 4th Annual Student Poster Competition which was held 10 April 2013, publishing articles such as journal papers and book chapters with faculty, winning awards at national and international for best oral and poster presentations, conference attendance at national and international meetings, as well as being volunteers for the King Faisal International Prize.

Mr Abdulhadi AlAmoudi, a final year medical student and Director of the Undergraduate Research Committee in the College of Medicine said that “I believe that events such as the recognition ceremony are very important in encouraging students to join scholarly driven projects. It is also well known that appreciation will help in retaining those students who are currently doing research to continue on this path. We were also very happy with the recent announcement of the Boeing Student Research Awards competition.  I think that we, as students, will continue to help advance the undergraduate research culture on campus.”

There was also a surprize guest speaker Mr. Paul Salopek an American journalist and writer and two-time Pulitzer Prize winner, who is currently on a seven year walk along one of the routes taken by early humans to migrate out of Africa. He spoke to the students about the next generation of Saudis making history every day. Mr Salopek’s journey which will cover more than 20,000 km, beginning in Africa, in Ethiopia, across the Middle East and through Asia, via Alaska and down the western edge of the Americas to the southern tip of Chile, aims to cover current major global stories by walking alongside the people who live them. The project entitled Out of Eden is partially funded by the National Geographic Magazine.