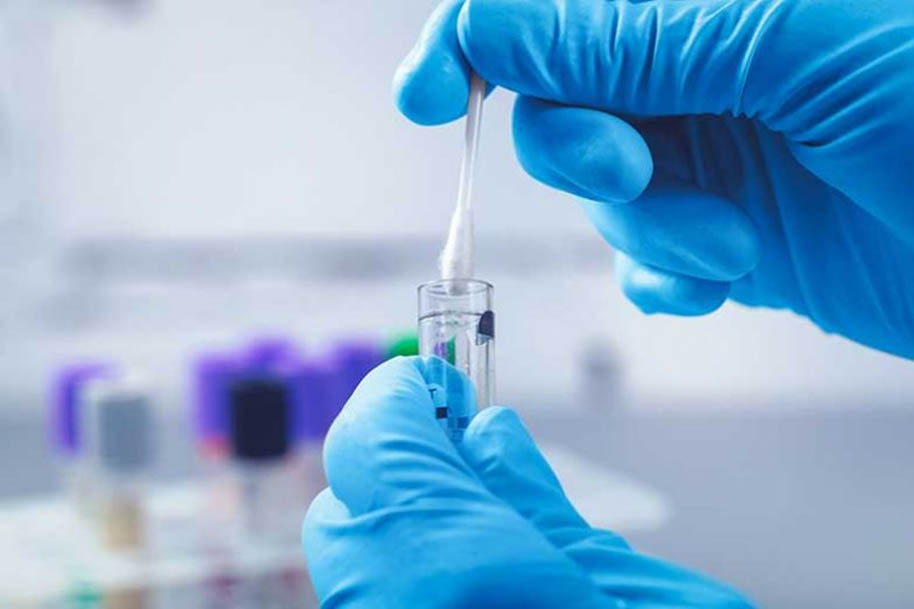 Alfaisal University in Riyadh is developing low-cost technologies to detect pathogens in health settings, the food industry and the environment. If you ask Mohammed Zourob why he is working in his current area of research, his answer is simple. “Saving lives – that’s really my main motivation,” he says. Professor Zourob leads the biosensors and bio-nanotechnology lab at Alfaisal University in Saudi Arabia, where a team of researchers is developing low-cost biosensors to detect viruses and infectious agents.

The researchers have developed a patented technique using low-cost materials such as paper and cotton swabs to detect disease, indicating its presence by a change in colour. This technique provides a quick, cheap and easy way both to diagnose illnesses and to prevent the spread of pathogens between people or via food and the environment. In biomedical settings, the biosensors are employed to diagnose disease by taking swabs from a patient’s nose or throat, or even to detect the presence of pathogens on surfaces in a hospital that could become a threat to a patient’s health.

Cotton swabs on which the samples are collected change colour according to the type of pathogen they detect. “For example, if I’m looking for a specific virus such as Covid-19, which is spreading extremely rapidly worldwide, the swab will change colour to red. Another type of virus will give me a different colour, and so on,” Professor Zourob explains.

The biosensors could also be used across the food industry, to detect contamination in vegetables, meats and other products. Professor Zourob is already working with various national labs in Riyadh and in Qassim to test the use of sensors in screening for contamination in food and for food-borne pathogen detection.

“We are really hoping that in the near future these biosensors will become very widely used,” says Professor Zourob. He decided to focus on developing low-cost biosensors, which use inexpensive materials such as paper for sample collection, largely because it means that they will be easily accessible. It also implies that they could be manufactured in high volumes for a vast range of applications, including large-scale screening.

The sensors that the researchers at Alfaisal have developed similarly have the advantage of being highly portable, and they don’t require the use of a lab or complex equipment to analyse, which means that they can be used to find results in the field without being sent to a central lab. This creates a further benefit, particularly for regions in which there is no electricity, and for people living in isolated areas. Professor Zourob adds: “These kinds of biosensors can be utilised by unskilled individuals. The sensors are highly sensitive and the technology shortens the analysis time, so the results can be seen very quickly – within a few minutes.”

Testing is already under way on sensors for Middle East respiratory syndrome coronavirus (MERS) and other types of coronaviruses. The biosensors can be adapted to detect a vast range of pathogens, and Professor Zourob is working to adapt the technology to detect Covid-19 in the field, to help in the worldwide effort to contain and treat the coronavirus strain that has spread so rapidly after its outbreak.

The lab is also developing a way to integrate the sensors into a facial smart mask, much like the masks people wear to try to prevent the spread of diseases. “That would allow us to see if individuals are high risk, if they’re carrying any infections, and then allow them to go and get treatment – or at the very least, to isolate themselves so they don’t transmit the virus,” Professor Zourob explains.

These masks could help to avoid outbreaks of infections in areas where large numbers of people are crowded together, which is a frequent risk in Saudi Arabia, he says. Millions of tourists normally travel to the country every year to perform religious pilgrimages, visiting the sacred sites of Mecca and Medina. Infections can spread quickly if people are not aware that they are carriers.

“We get individuals coming from all over the world and we’d like to do some sort of screening at some point for these people to know who is carrying what,” Professor Zourob says. “When you go to those locations, it’s really, really crowded. So, if one person is infected, they can infect not just hundreds, but possibly thousands of people around them.” Smart masks could even be used to screen people as they come into the country, he adds.

While the biosensors project is not without its challenges, some of the sensors – those using paper and cotton swabs to collect samples – are moving closer to actual application. Work on detection for a range of pathogens has progressed well, thanks in part to the team of more than 20 researchers and postgraduates working in the lab. Some biosensors are still in the early stages of development, but others are already being tested in the field.

Professor Zourob is likewise working with a number of partners across Saudi Arabia to develop the technology further. They have collaborations with King Abdullah International Medical Research Center in Riyadh for testing sensors that Alfaisal has developed to detect MERS, and King Faisal Specialist Hospital and Research Centre, also in Riyadh, to test for other viruses such as Covid-19. The next stage will be to commercialise the technology, which Professor Zourob plans to do via a spin-off company.

Alfaisal will furthermore continue to adapt low-cost biosensors for an ever-growing list of viruses and infectious agents. As well as Covid-19, Professor Zourob’s next targets include dengue fever, the Alkhurma haemorrhagic fever virus and Rift Valley fever.

Call for Papers for a Conference on “Islam and the Construction of New Economic...