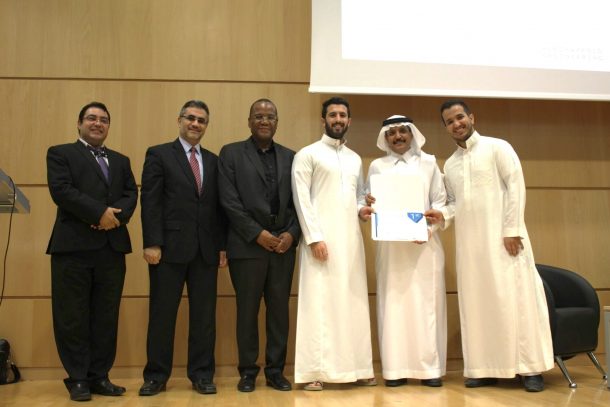 The “Connected and Autonomous Vehicles Design Sprint” takes place under the patronage of The Happold Foundation in partnership with Alfaisal University, and BuroHappold Engineering. The event is the second of a series of seven – each one focussing on a particular topic. The first challenge launched in February 2016 is titled “Housing and the Integrated Neighbourhood” and requires students to design a future neighbourhood of Riyadh. This second year challenge was in the form of a day long design sprint on “how can urban streets be reclaimed and reimagined through the introduction of connected and autonomous vehicles?”

On December 10th 2016, BuroHappold Engineering collaborated with the Architectural and Engineering Faculties at Alfaisal University to host the CAV design sprint, where student groups competed to design the most original solutions for reclaiming the streets of Riyadh in an era of autonomous and connected vehicles.

Eight teams participated from three universities Alfaisal University, King Fahd University of Petroleum and Minerals, and Prince Sultan University, and joined them high school students from the British International School (BIS), all performed well during a very intense and long day, that included lectures, brainstorming, options development and the presentation of each Team’s vision for a selected street in the Kingdom of Saudi Arabia.

On December 21, the Jury members had selected the winners as follows:

“At Alfaisal University we see the great value in collaborating with Industry Partners to develop the skills of our students,” Dr. Mohamed Anan, Acting Dean and Associate Professor at the College of Engineering of Alfaisal University. Additionally, “we bear responsibility towards our students who will help shape tomorrow’s society; it is why we provide a sound educational platform that encourages innovation and offers the best chances of success for themselves and their communities”, affirms Dr. Tarek Mokhtar, Architect, Designer, Chairman and Assistant Professor of Architectural Engineering in the College of Engineering at Alfaisal University.

Memorandum of Understanding between Alfaisal University and Fraport Saudi Arabia

Pritzker Prize-winning architect opens up a lively discussion on ‘architecture and...