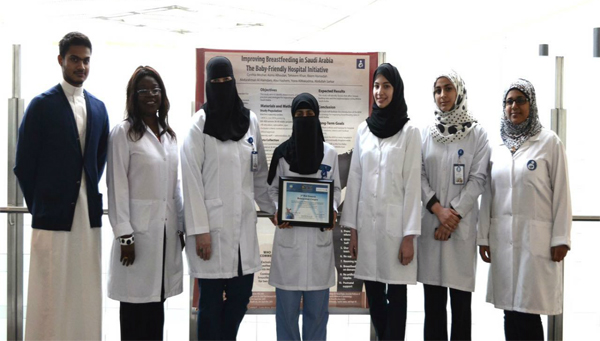 The Baby Friendly Hospital Initiative (BFHI) team, mentioned below, is pleased to announce the publication of the clinical study entitled: Self Reported Breastfeeding Practices and the Baby Friendly Hospital Initiative in Riyadh, Saudi Arabia: Prospective Cohort Study, by the BMJ Open, after having presented the preliminary findings at the university and at national and international conferences and symposiums.

Under the dedicated guidance of Dr. Abiola Senok, and great support and encouragement by Prof. Khaled Al Kattan,, the team worked extremely hard through each and every phase of the study. It was well worth the effort to be able to produce such a wonderful study and gain this publication achievement.

Objective: This study aimed to examine reported experiences and views on breastfeeding of women using pre- and postnatal services, and opinions of staff, in the context of the BFHI program in Riyadh, Saudi Arabia.

Methods: Women 36-40 weeks gestation receiving antenatal care at the hospitals were enrolled. Questionnaires were administered prenatally, at one, three and six months postnatal and to administrator and maternity staff.

Conclusion: This is the first study assessing the effectiveness of BFHI implementation in Saudi Arabia. Although women reported increased breastfeeding rates, the study identified important weaknesses that could be improved through strict compliance with BFHI practices.