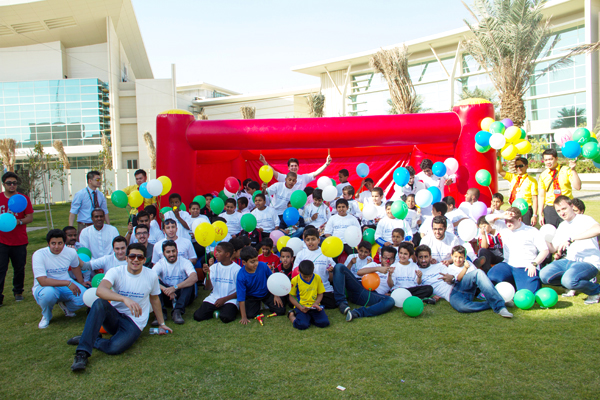 Alfaisal University’s Marketing & Public Relations Department in conjunction with “Ensan Association” hosted a fun day for 70 orphan boys as part of its social responsibility.  The Orphan fun day which took place in the grounds of the Late King Faisal’s palace, AU campus on Thursday 21st February 2013 from 11am -4pm.Children (boys) ranging from 7 – 10 years of age from Ensan spent a fun-filled day with us, partaking in different activities, like Football, Frisbee, painting, the jumping castle, entertainment from a clown & magician and even face painting.

McDonalds the sponsor of this event provided us with all entertainment, food and an unforgettable afternoon for the children.  We received an overwhelming response from our students on the announcement for the event and received more than 40 volunteers helping with games, organization and putting smiles on the children’s faces.

Marketing & Public Relations Director Mr. Adel Rajab stated “This is the second Orphan day event that has been organized by Alfaisal University, and we hope to carry one our efforts during the month of Ramadan.  Any help, suggestions and ideas are welcome”.

At the end of the day all children received a refreshing ice-cream to cool them down after all the activity, fun and games, and toys were distributed that the students purchased on the day courtesy of Toys R Us. We would like to thank all the students that helped make this event a memorable day in the lives of the little ones that came to play; you left them with memories that will make them smile.

Many people believe that they don’t have what it takes to make a difference to the world. They believe only people like Mahatma Gandhi, Mother Theresa, Thomas Edison, Albert Einstein, Bill Gates, and the likes, are capable of making a difference.The truth is, every one of us is put in this world to contribute and make a difference to the world in our own unique way. It just needs to be something you do with the intention of ‘doing good’…And you all did!