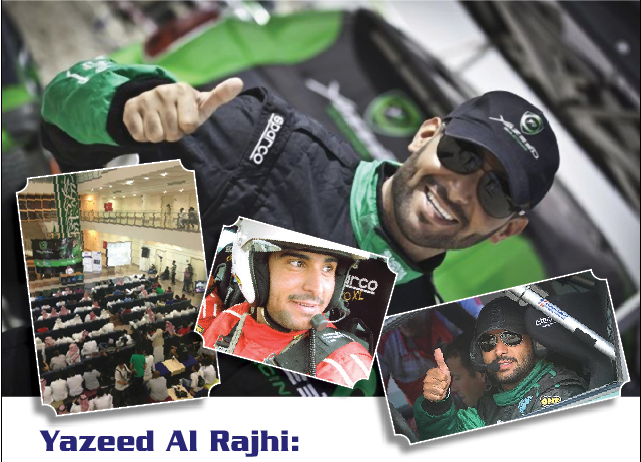 Thursday 23rd of May, 2013, Alfaisal hosted for the first time in collaboration with “Thursday’s Meeting” team guest  Yazeed Alrajhi, Saudi rally racer, to talk about his experience and achievements as a young Saudi racer champion. Following his recovery from a car accident in Ha’il Rally in 2013, Mr. Yazeed made his first appearance to address the young generation of Alfaisal university students. With over 500 attendees;  male & females the event kicked off with an opportunity for all to attempt  a go at the car simulators, provided by Alrajhi racing team, and to record their attempts (fastest) drivers allowing particpants to live and experience first hand the Yazeed experience. Gifts were awarded to the fastest racers at the end of the evening, courtesy of Yazeed Al Rajhi.

Racer Yazeed made his appearance in the evening to shed some light on his childhood dreams to become a racer and how he started his career in his early days, he also expressed his passion towards cars and mentioned the difficulties he faced in the society starting with his family concerns and observation about this hobby. He also talked about his participation in the 13 rallies that he raced in. It was noted that Racer yazeed started his career in the year 2008 and is still racing until today, he wish to establish his own racing circuit and racing school.

A  “photograph session” was also part of the evening surprises, where guests had the opportunity to take photos of the racer’s winning cars with the best three photographs given a gift at the end of the show. The evening ended  with audience receiving gifts that included  air tickets to Turkey, Iphone & Ipad!!  Yazeed gave hosts of the event a big thanks and also to his fans in the audience for participating.

Alfaisal University Hosts Images of Science Exhibition in Collaboration with the...

Seven Tips to Help you Overcome the Mental and Emotional Challenges...