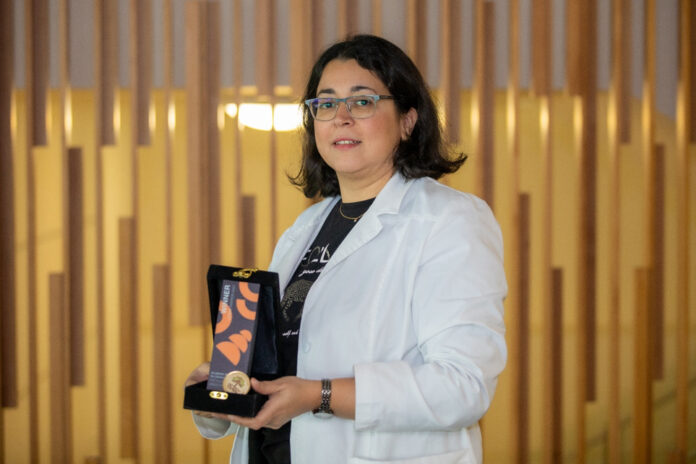 Prof. Souraya Goumri-Said, Associate Professor of Physics in the College of Science and General Studies was awarded the Academic Achievement for University Professor Award by the Leadership Excellence for Women Awards by (LEWAS). Focused on ‘Energy Future: Infinite Possibilities‘, the 2022 theme highlights the role of leadership and innovation for a sustainable tomorrow

Prof Souraya received the award for her research performance in energy and academic achievements at Alfaisal University, commenting on this win, she said “This prize represents many things for me, not only does it reward my efforts in the field of research on renewable energies and material science that I have implemented at Alfaisal University but also the support that I give to my female students through my supervision of their research projects. Integrating female students in my research has been successful and has generated many publications in highly indexed journals recently. This award shows that a female faculty when surrounded by an encouraging academic environment and supported by internal fundings, like those I received from the office of research at AU, can dedicate her research activities time to tackle problems of energy and environment. I am glad and proud that I have represented my university and my college of science in this category at LEWAS”.

In 2004, Prof. Souraya started out as an adjunct assistant professor at the Université Paris-Est Créteil in France. She then joined the physics department of technical University of Kaiserslautern in Germany, worked as researcher at Université de Namur in Belgium, later managed an industrial project within ArcelorMittal research and development department in collaboration with three universities in Wallonie region in Belgium and joined KAUST in 2010 as a research fellow. Currently, she is teaching undergraduate and graduate courses on physics for engineers, physics for life science and renewable energy storage systems at Alfaisal University.

LEWAS began in 2013 with the objective to Engage, Empower and Elevate women in energy. Since its inception, it has recognized and honoured women who are not only making a mark but are also being an advocate for women empowerment in the Middle East.

Now in its 8th edition, the Leadership Excellence for Women Awards recognizes outstanding women in the energy industry who have excelled professionally and personally through their unmatched contributions in the areas of leadership, innovation, talent, research, and outreach.

Each of the seven awards given  covers categories ranging from academic excellence to technical categories. Open to women of age 18 onwards and all nationalities based in the Middle East, LEWAS encourages students, academia, line managers, business directors, scientists, owners, content creators, government, and private sector to participate as long as they have worked in their capacity to make the energy industry a better place.