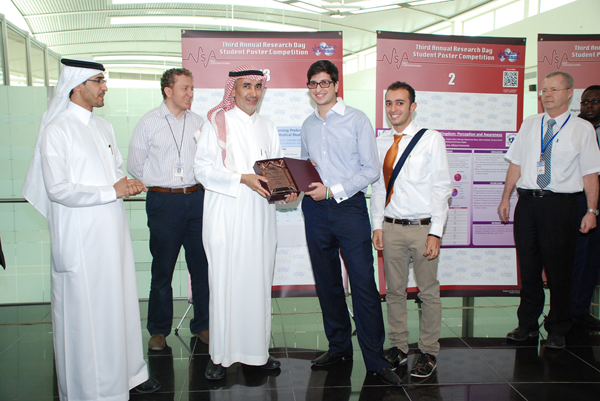 The Third Annual Student Poster Competition which was held on Wednesday 25 April 2012 at Alfaisal University attracted 30 submissions of which 23 posters from three colleges (Medicine, Engineering and Science & General Studies) were actually presented. This number is greater than in any of the previous two years. In the competition students presented their research activities/ proposals/ future programs. The “Research Day” is held to strengthen the vision that research is indeed one of the missions of Alfaisal University.

We would like to thank all those who took part, students as well as the judges and faculty advisers.  Special thanks also go out to the MSA (Medical Student’s Association) who helped to design a standardized poster template.

There was a tie for Third Prize. Naqi Haider Rizvi from the College of Engineering receiving an award for a poster entitled Mobility and Navigation Aids for Visually Challenged Individuals in an Indoor Environtment. Mohamed Diya Sabbagh and Abdulaziz AlKattan from the College of Medicine received an award for a poster entitled RP1 And Retinitis Pigmentosa: Report Of Novel Mutations And Insight Into Mutational Mechanism.

All 23 posters will be on display at the Alfaisal University Graduation Ceremony which is schedulled for 20 May 2012.  Once again we want to congratulate all those students who took part in this annual event and who helped to make it such an enormous success.